Digital semesters due to the Corona crisis also lead to expanded offers of online books or e-books in the TUHH network at the TU Hamburg. As early as May 2020, we had responded to this together with other Hamburg libraries.

With the year 2021, online books from additional publishers have now been added to the library holdings acecssible at TUHH. 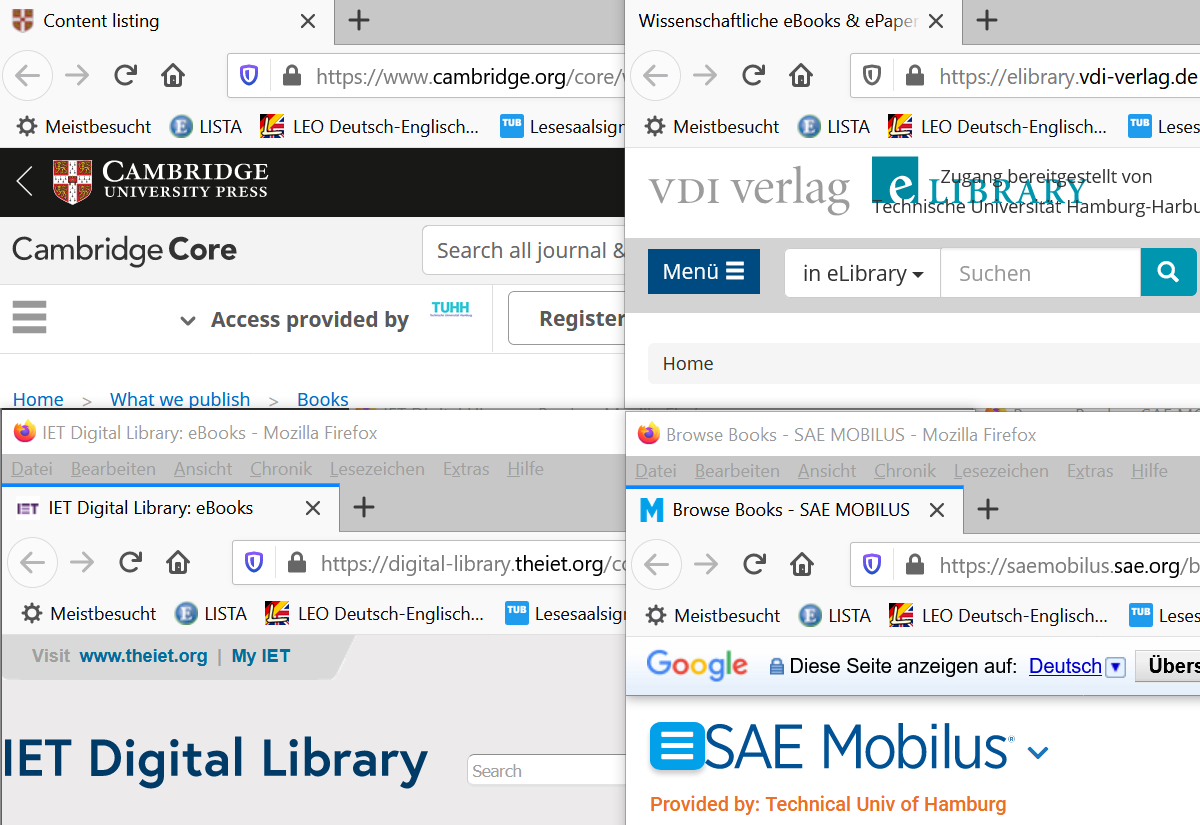 Continueing to be available at TUHH are online books from the following publishers:.

At least for 2021, these textbooks remain accessible online:

Not renewed was access to all Wiley ebooks. Within the last few years’ contracts, we had bought the most used Online- Books purchased from Wiley firmly for access at TUHH. Purchase requests for e-books of individual Wiley titles not available at TUHH are always possible.

25-04-19
TUHH has joined the contract of the DEAL project with Wiley Publishing House. You can find some information about the conditions here.
25-02-19
On January 15, 2019, for the project Deal a contract has been signed with the publisher Wiley. The contract now has been published.
01-01-19
TUHH no longer has access to the complete range of journals published by Elsevier-Verlag. Periodicals for which the TUHH has archive rights are still available.
21-12-18
There is a transitional agreement with SpringerNature, so that the journals available at TUHH will remain accessible in 2019. Negotiations with Wiley will continue, but Wiley’s journals will be available until the end of January 2019.
04-12-18
Springer journals will continue to be available during negotiations in 2019.
12-11-18
The TUHH has cancelled all journal subcriptions with the publishers Elsevier, Springer und Wiley to the end of 2018. The TUHH takes part at the project DEAL.

With the project DEAL the German Rectors’ Conference (HRK) is negotiating on behalf of the Alliance of Science Organisations in Germany with the big STEM publishers (Elsevier, SpringerNature und Wiley) about nation-wide agreements for licensing e-journals. The aims of DEAL are:

What does DEAL mean actually for the TUHH?

What does DEAL mean for the access to e-journals at TUHH in 2019?

In 2015 access to most of the journals of ScienceDirect, the platform of the publisher Elsevier, is possible within TUHH intranet.

In addition to 57 journals subscribed until now, the TUHH library licensed for one year the so-called „Freedom Collection“ of the publisher (Information page of Elsevier). With this licensing access is possible to more than 2300 journals starting with the year 2011. Archival rights for permanent access to the journals have not been acquired within this additonal package.

The Mendeley team has confirmed the rumors: Team Mendeley is joining Elsevier.

Mendeley has been a rather popular reference mangament tool combined with a web-based social network. According to their post, only little will change for their users. As a bonus storage space will be increased. The free version of Mendeley is to be continued.

The Mendeley team realizes, that they will encounter critical reactions in the academic community for their decision :

Of course, we are aware that – especially in the past year – the academic community has criticized Elsevier for some of its policies and positions. Our own relationship with Elsevier has been conflicted at times.

From their point of view however, the assets have been in favor of joining the publisher:

In sum, the overlap between Elsevier’s and our vision has always been remarkable. Combining Elsevier’s content, analytics tools, and long-standing publisher/society relationships with Mendeley’s collaboration platform and social data will enable both of us to develop amazing new services that will make your research life easier.

eBooks from publisher Elsevier via ScienceDirect are available within TUHH intranet for a further year. How much you use specific eBooks will influence which eBooks we keep afterwards.

For the year 2012 the decision was already made. Here is a list of most-used eBooks in 2012 which the TUHH library has bought:

The following 5 top titles, heavily used, have not been bought until now, but maybe at the end of this year.