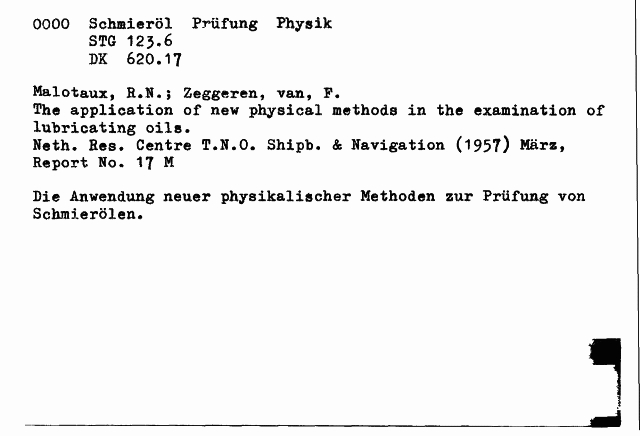 Starting with a consecutive card number and followed by the subject indexing then author, article title, the source and a brief summary is given, often referred to numerical data (such as the ships dimensions, capacity, the drive power of the engines, etc.) to the described ships.

The index cards were accessible according to the following aspects:

You can search a single word or a search phrase. The search term is searched truncated in the index of all cards. The first card that contains the search string is displayed and the number of hits. Among the other results can be navigated using the arrows.

It is helpful, after finding one of the most relevant search tab, use the STG-Notation or the DK-Notation in the search box to search for more literature references.

“The Schiffbautechnische Gesellschaft e.V. – STG – (The German Society for Maritime Technology) was founded 1899. The purpose of our Society, a non-profit-making organization, is to provide a forum for shipbuilders, shipowners, sub-suppliers, scientific persons and institutions connected with shipbuilding, to discuss and examine matters of a scientific, technical or practical nature, and to promote matters of interest to maritime technology as a whole.”

In the period 1962-1992, the STG has operated a “Documentation Center Marine Technology”, which drove a large distortion of the shipbuilding and literature created. Evidence is mainly German-language literature, but there is also evidence of selection in English, French, Japanese, Dutch, Russian and Polish literature. A copy of this documentation file was acquired from the Hamburg University of Technology and placed in the University Library. It included about 90,000 references: shipbuilding and marine engineering (design, manufacture and operation), but also the appropriate topics like fluid mechanics and materials engineering, electrical engineering, control and feedback control systems, the measurement technique and data processing in marine technology are listed.

In 2005 the STG, represented by their Chairman Professor Dr.-Ing. Eike Lehmann, granted the right to reproduce (providing this information on the Internet) to the University Library of the Hamburg University of Technology (TUHH). The catalogue cards were scanned and the index is made available on the internet since May 2007.