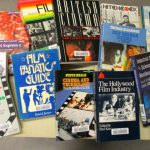 On December 18, UFA celebrates its 100th anniversary. It was founded in Berlin and from 1922 onwards films were also produced in Potsdam Babelsberg. The UFA experienced its heyday in the 1920s to 1940s. During this time she played a major role in German film history. Well-known productions are e. g. Dr. Mabuse, Der blaue Engel or Die Feuerzangenbowle. Today, UFA is the market leader in German television and produces entertainment for the masses.

On this occasion, we present you media on the subject of film on our shelf in the entrance area of the library.
Browse our list of literature on this topic.